Visiting a Kindergarten on the outer reef of Owaraha

I take the Zodiac to explore the western reef of Owaraha in the east of the Solomon Islands. The first place close to the entrance into the bay of Port Mary on Owaraha has a great coral cover and variety of fish. Nevertheless I found a 30cm thick layer of freshwater just under the surface, a consequence of rain water running from the island into the bay. The result is a very blurry visibility. Further outside the bay the freshwater layer disappears. The sloping reef is covered with a great number of different colorful coral species. While I dive down to carefully place the anchor of the Zodiac an adolescent White Tip Reef Sharks cruises around a small area of the reef possibly sensing and hoping for some easy prey hiding between the coral crevices. A little later a second White Tip joins as well as a Black Tip Reef Shark. The outside world stands still while I observe these majestic predators hypnotized. 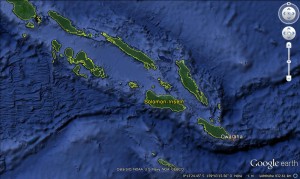 My highlight of this morning’s snorkeling session though lays in a small detail that has been on my tick list for quite a while! 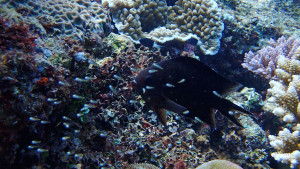 A pair of Spiny Chromis (Acanthochromis polyacanthus) is constantly alert and chases away all potential predators to protect their tiny offspring. While the school of silvery juveniles feeds on plankton that is drifting past to gain nutrition and strength they immediately respond to their parents signal and lower themselves towards the safety of the bottom.

This 15 cm long member of the Damselfish family is one of only a few fish species in the ocean lacking a pelagic larval stage, which accounts for the localized range of many variations. Visual ID is nearly impossible due to highly variable color and markings depending on the geographical location. Two large adult Damselfish tending many young is the clue to identify this species. It is extremely rare to find fish in a reef that perform brood care further than the larval stage!

I love visiting the reefs of the Solomon Island. Marking the east corner of the world famous Coral Triangle, they are always awaiting with pleasant surprises!